Making the most out of your Truce Tower

Following the ‘lightbulb’ moment both Harp and I had during a conversation a few months back, we realised that it’s actually the Truce Tower, and not the Arc, that’s the most powerful and useful GB in game for younger players.
Arcs are fantastic, don’t get me wrong, but they only help in getting the blueprints of GBs or the FPs to level them, they leave out one crucial component – the goods to build them.

In this respect, the TT and Arc work hand in hand and should be considered the essential pair of GBs for anyone looking to get high level GBs early.

However, the reason the TT hasn’t become the amazingly popular GB it deserves to be is because it takes a bit of work to optimise, and the vast majority of players either don’t want to do that, or – more likely – haven’t worked through the logical steps to realise how useful it really can be.

So, just to brush up on the basics quickly…
WHAT THE TRUCE TOWER DOES: 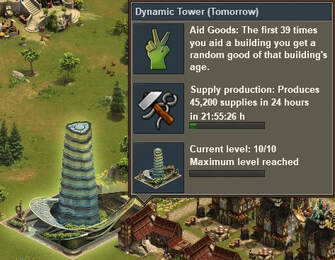 Note: It's since changed to the Truce Tower.
The Truce Tower’s boost is to give you a good from the Age of the building that you motivate or polish, x-number of times according to the TT’s level (at level 10 that’s 39 times).

If you have friends all from around your own Age, and just hit the ‘Aid’ button as an automatic polivate, you’re probably just going to get 39 goods that you already have plenty of – it’s basically just become like another Lighthouse or Babel, minus the other things those GBs give.
This is why the TT isn’t really rated by a lot of people, ‘cause they don’t use it well.

But what happens if you have a friend in your list who has made it all the way up to Space Age Asteroid Belt (SAAB)?  If you hit one of his SAAB level buildings, you find yourself with a SAAB good.  Now one of those on their own isn’t too useful, but if you collected enough to trade down, you can very quickly start seeing the value.
Remember that the amount of goods in a trade doubles every Age you trade it down. 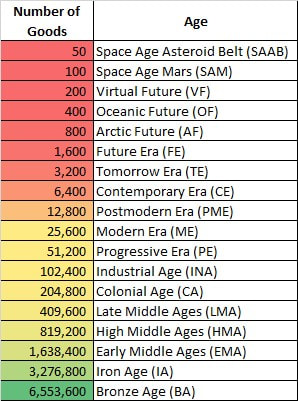 Now of course the markets aren’t an endless fount of goods, there is a limit on how many goods actually exist in game, but the point is that these goods are *valuable*, and if you keep putting them up on the market, you’ll have a consistent income of goods as a result.

Just to explain briefly how the friends list works…
There’s a soft cap at 80 friends.  Up until this point you’re able to send our friend invites and fill up your list.  But after you have 80 friends, you are only allowed to accept friend invites that are sent to you, up to a hard cap of 140.
So your first 80 are important to optimise, and after that point anything more is a bonus.

This works in our favour, as high-level players will have undoubtedly hit their 80 cap, but may well be still under their 140 limit, so there’s no reason why they shouldn’t accept invites from lower players, there’s nothing to lose for them.  This is especially the case if they look at our city and see we have a Truce Tower, as – if they take two seconds to think about it – they’ll realise that we’re very, very motivated to aid them on a daily basis, which a lot of the other friends probably won’t bother to do.

So don’t be like me and feel hesitant to send invites to high-level players, thinking that they’ll disregard anyone from a lower level.  The likelihood is that you’ll get more accepting the invites than declining them.

But back onto the two uses of your friends list…
COLLECTING:

To optimise what you collect each day, you’re going to have to have a number of highest level players (currently SAAB) equal to the number of charges that your TT gives you – as mentioned before, this is 39 at level 10.
I personally like to have a few more as a buffer, as there’s always people who don’t have any SAAB level builds to aid when you’re wanting to aid them, so it’s better to leave them for another day and go on to one of your reserves if you can, rather than having to settle for a SAM or VF good.

I will state at this point as well, that it’s *strongly* recommended that you get in the habit of manually aiding to use all your TT charges, and not just click the ‘Aid’ button.
This is because the Aid button works on an algorithm of what’s most useful to the player, not necessarily the highest level building they have.  So it’s quite possible that an auto-Aid could result in a Future Era good, while an open SAAB building was sitting right next to it.

You’ll also probably have to get out of the habit of aiding from the lower end of your friends list to the higher, you’ll want to start at the highest and work your way down.  It’s easier on PC than it is on device, but still entirely possible to do on both.

Physically go into each players’ city, otherwise you can’t be sure you’re getting the best option.
I usually head straight for the Train, if they have one, because this is one of the lowest buildings on the auto-aiding algorithm but is often very high level, so there’s a good chance it will be available for aiding when you go in.

If you’re on PC, click Motivate and hover over a building to check that it’s the highest level, if not, keep looking till you find one that is (if they’re around).
If you’re on a device it’s a little trickier, you have to tap the buildings first to see whether they’re open for aiding, then choose either motivate or polish, then go back to that building and tap it.  You may want to zoom in so you don’t accidentally tap the wrong one – I accidentally motivated an Iron Age Blacksmith once because it was right next to a SAM level Train (high level players often have a lot of Blacksmiths dotted around so as to fulfil those ‘produce x-number of productions in supply buildings’ quests.  So avoid them like the plague.

Rinse and repeat for as many charges as you have, and then go into your Inventory and bask in the warm glow of the ultra-high level goods you’ve just collected.  😊
TRADING DOWN:
This is where it starts to get a little trickier…
Your market is unique to you, your trades aren’t visible to everyone on your world.  Only your neighbours, guildmates, and friends can see your trades, and of those, only guildies can take them for free.

However, guildmates are a finite resource, we simply don’t have the type or quantity of goods required here, and for that reason, I’m going to be requesting the following guideline be adhered to:
DO NOT POST TRUCE TOWER TRADE-DOWNS INTO THE GUILD TRADE THREAD.
This is because it’s counter-productive for our guildies to take these swaps, if they’re even able to.  With all of us trying to trade down, posting the trade in our guild trade thread puts pressure on someone to then trade up, undoing the work that they did previously to get the goods traded down, so it ends up just shuffling the goods around in a neutral value way within the guild and we don’t actually end up anywhere.

So, in terms of trading down the TT goods, guildmates aren’t any help.  Nor are neighbours in all likelihood, because they’re all going to be the same level as you, which means they’re probably not going to have the high-level goods to trade.
That leaves friends.

Your friends are realistically the only source of customers for trading down your TT goods, so you’re going to want to make sure you’ve got an optimised list.  And a list optimised for market trades is different than a list optimised for TT collection, which is a bit annoying, but as I said, it’s luckily big enough to accommodate both.

While the highest-level players may have plenty of goods from previous eras, they will likely have little motivation to take the trades, as they wouldn’t have a direct need for them.  Therefore, you’re going to need players from a whole range of Ages who are active and who both have the means and the incentive to fulfil those trades.

So if you have 50 SAAB friends (enough to fulfil your 39 daily collections, plus a decent buffer), you then have 30 spaces to fill.  This is enough for 2 players of each Age from Space Age Mars down to Early Middle Ages.
That’s just an example, it doesn’t have to be as regimented as that, but the important thing is to make sure you have a good spread of all the Ages that you’re wanting to be trading down through, otherwise your trades are going to get caught in a particular level and aren’t going to budge.

So, that’s what we’re aiming for, but how to do it…?
ACTION PLAN: 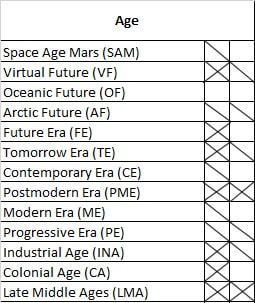 Here’s a step-by-step guide with my suggestions for how to optimise your friends list, both for collecting and trading down.
It will take a bit of work, but setting this up now will make everything *so* much easier in the long run.


Please feel free to ask me any questions you may have.  It is a bit of a process, and may be a bit challenging to get in the habit of doing at first, but just think of the rewards every time you see one of those shiny SAAB goods make their way into your inventory…  😊
I've added some additional guidance on how to get the down-trades working here.