How to use Great Building swap threads

Swap threads - you’ve heard about them, almost every Guild mentions them in their description, but what do they actually do and how do you use them?

Firstly, before we start explaining about swap threads we must give a public service broadcast – you will no doubt have heard about this before but I am going to repeat it again and I make no apologies for doing so.

DO NOT LEVEL ANOTHER PLAYERS’ GREAT BUILDING UNLESS THEY HAVE SPECIFICALLY SAID IT IS OK TO DO SO.
This is because a Great Building's timer immediately completes and resets as soon as it's levelled.  So if this happens midway through its production, it throws it out of sync from the player's collection.  Also, it's common practice for a player to level a GB directly after collection, which means they get to collect from it twice in one day.  This is known as a 'double-dip', and making a player miss it could mean that they lose dozens of Forge Points or goods.

So, with the warning complete, let’s move on to swap threads.

The first thing to say is what they will not do – they will not level your GB any faster than if you put your FPs into your own GB.

“So why should I bother using them, if I can raise my GB in the same time?  I might as well carry on doing my own thing.”

Yes, good point, EXCEPT that by doing so you are depriving yourself of the opportunity of receiving back some FPs, Medals and Blueprints when other peoples GBs level, something that you don’t get if you only put your FPs into your own GBs.

I will return to this after I explain the principle of how swap threads work in practice. 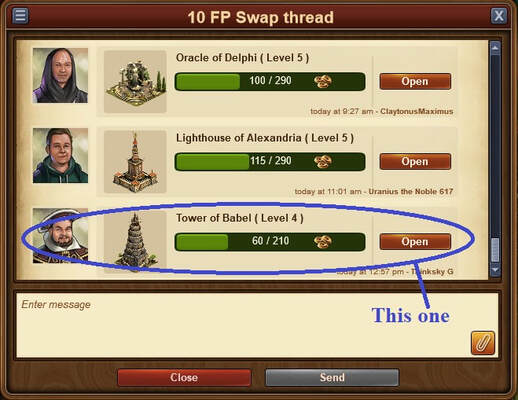 The examples below are purely for teaching purposes and do not reflect actual GBs that have been placed on the threads.  Let us take the 10 FP swap thread as an example here.

The last GB posted was a Cathedral of Aachen posted by Player A.  You add 10 FPs to the Cathedral of Aachen and then attach the GB that you want 10 FPs added to, to the thread.  Player B will then add 10 FPs to your GB and will then post their own GB.  This cycle then continues as more and more people use the thread.  Obviously, as soon as someone has added the required FPs to your GB you are free to repeat the above by adding the required FPs to the latest GB and re-posting your own.

Now, let me explain why using swap threads is advantageous.

Players A and B both have a Statue of Zeus which have just levelled to level 6 and now need 330 FPs to fully level up to level 7.

Player A invests all their FPs from daily collections over a period of days into their own Statue of Zeus and no other player adds any FPs for them.  Eventually they invest 330 FPs into the GB and level it up to level 7.  They feel happy that they have completed another level.  Net FP spend 330 FPs. FP profit 0, medal profit 0, Blueprint profit 0.

Player B invests their FPs from daily collections into other peoples’ GBs via the swap threads and posts their Statue of Zeus to the threads to receive other peoples’ donations.  Once they have invested their FPs via the swap threads their Statue of Zeus levels up to level 7, having ensured they are the last person to add the final few FPs required to level it.  They feel happy that they have completed another level.  Net FP spend 330 FPs.  FP, medal and blueprint profit – unknown, but likely to make some profit on aiding other peoples’ GBs.

Player B, therefore, stands to gain some advantage by using the swap threads due to the receipt of bonuses from the GBs of other people once their GBs have levelled.

I hope that this has explained how swap threads work and why they are advantageous to you.  If you still have any questions about them please send a message to either HarpViola or Velah and we will be pleased to help.