Broadly speaking, there are four different types of buildings:

The events that the game runs each year do change from time to time, and they usually update the main reward building, so just because we got the Crow’s Nest during last year’s Summer Event doesn’t mean we’ll get it again during this year's Summer Event.
However, they often include ways to get previous years’ event buildings.  For example, last year the Colossus Statue was the main event building for the Forge Bowl, this year it was the Olympic Treasury, but there were still two days where the Colossus Selection Kit was the Daily Special, so if you focused your play on those days you could still end up constructing a Colossus.

Event buildings are nearly as diverse as Great Buildings in terms of the benefits they provide, because in addition to material resources, they also often give boosts and bonuses.  If you’re setting out to get an event building, always make an effort to get it to the top level (‘maxed’), because you’re spending the same amount of space whether it’s 1st level or 10th, but the benefits will vary greatly.  This isn’t always possible, but if you’re lucky sometimes upgrades will be available year-round in the Antique’s Dealer, so you might be able to pick them up for a decent price there and finish levelling even well after the event is finished, as seen here: 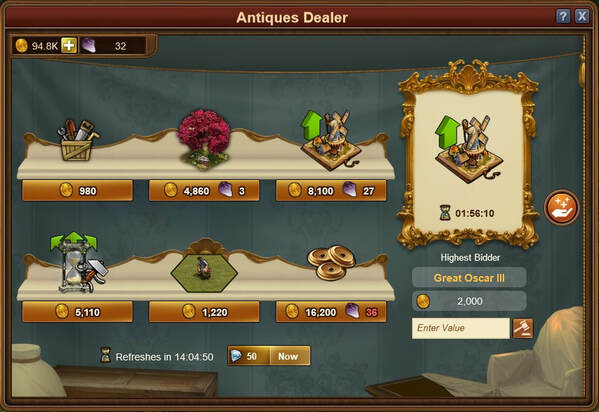 Here, an upgrade for the Mill of Fall event building can either be bid upon in auction, or bought outright. 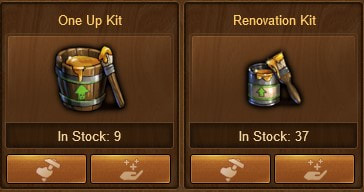 One important thing to note about event buildings is that they’re locked to a specific Age; the Age in which they were acquired.  So, if you have a Tholos of Idols that you got in the Early Middle Ages, it will continue producing goods from the Early Middle Ages regardless of what Age you level up to.
This is either a benefit or detriment, depending on how you look at it.  While we generally want to maximise the amount of goods we produce in our current Age, there certainly can be uses for having a stationary goods-producing building from a lower Age that acts as a continual source of goods from that Age.  But if you decide you don’t want that, you can always use a One-Up Kit or Renovation Kit to level the event building’s Age to one that’s more suitable for you.

Secondly, some event buildings can be plundered, and others can’t.  The general rule of thumb is - any building that can be motivated can be plundered, but once it’s motivated, it’s protected from being plundered.  (Note: Goods production buildings can always be plundered, despite not being able to be motivated, so the rule of thumb does have exceptions).
For example, on its own the Colossus only produces coins (excluding the additional population and attack boost, which aren’t things that can be taken away).  The building can be motivated, so these coins are at risk of being plundered.  However, the building’s true value comes into play once it’s motivated, after which it doubles the amount of coins, as well as producing medals and Forge Points.  Once it’s motivated and these additional goods are unlocked, it’s protected from being plundered – so the most you could ever lose from it are some coins, if you were plundered while it was unmotivated.
A quick note about motivation…  For starters, it’s a very good thing to do.  Not only do you get coins and the chance of a blueprint, you’re also helping to protect your friends, guildmates, and neighbours from plunderers, while increasing their production.  And, in return, most people will motivate you back if they see you’ve helped them.  I’ve heard people ask if you can – or should – be specifically picking which building to motivate or polish (I haven’t talked about polishing here as it’s only relevant to cultural buildings or decorations in terms of ‘happiness’, which isn’t able to be plundered).
The short answer is you can, but you probably shouldn’t, unless you're specifically doing it for a Dynamic Tower collection.  When you polivate another player, the computer runs an algorithm whereby it automatically selects the most valuable building to either motivate or polish.  This doesn’t always run concurrently with what we personally feel is our best building, but for the most part it does a fairly good job of prioritising the high value buildings – so it’ll probably be quite rare that you don’t see an event building motivated by the time you’re ready to collect.
There is one notable exception to this, which is apparently a game feature and not a bug like we originally assumed, and that’s with the Winter Train.  The Winter Train, which was the special event building during the Winter Festival last year, can be motivated but motivation doesn’t mean an increase in resources.  This automatically puts it in a very low rank in terms of the motivation prioritisation algorithm, so it’s quite possible that it will be left open to plunderers if you’re not careful and don’t collect on time.  This is apparently meant to simulate a ‘train heist’, but personally I think it’s just a little bit crappy, and is the reason I’ve not been in a rush to build the Train on most of my cities.  I tend to have a lot of Shrines of Knowledge, all of which can be motivated, and the Train falls behind them in priority so I would be constantly risking losing all the resources it produces, and that’s not a risk I’m personally willing to take.
But back onto the event buildings themselves, and which ones are best to go for.  I’m going to be a bit selective in terms of what I include in this list.  For starters, I’m going to exclude all cultural buildings and decorations, many of which are tied to events.  This is simply because they only give happiness, and it’s easy to work out whether they’re worthwhile or not (just divide the amount of happiness they give by the number of squares they take up.  For example, the Eternal Tree of Love gives me 800 happiness for a 3x3 [9 square] footprint, so that makes it 88.88r happiness per square.  This is marginally better than the Gate of the Sun God, which gives 280 happiness for a 2x2 [4 square] building, which comes in at 70 happiness per square.  There are other factors to take into account, of course, such what space you have available, whether a road is required, and the fact that the more decorations you have, the more need to be polished to get maximum value.  For instance, it may seem like a huge waste of space to build the 4x4 [16 space] Public Bath for 570 happiness when you can dot 16 Lanterns in all those hard to fill spaces like at the end of roads, and get nearly the same amount of happiness without using up such a large chunk of space.  But consider that the Public Bath only needs one polish to go from 570 happiness to 1,140.  Whereas you’d need sixteen polishes to get the same amount from your Lanterns.  That’s fifteen extra polivates that could have gone to other buildings.  So as a general rule, I aim for large cultural buildings and keep my single space hard-to-fill spots for Victory Towers or similar, which don’t need polivating.)

But I’m getting waaaay off track here…
So yes, I’ll only be looking at the main event buildings given out during events, specifically the ones that can be levelled to increase their usefulness.  I also wanted to include sets (which mostly come from daily quests), special buildings (various sources, including quests and GE), and settlement rewards, but I think those would be better split out into their own sections, because this has already become a much larger post than I intended, and I haven’t even gotten to the meat of the subject yet.

To clarify, I’ll be assessing each building based on its maxed potential and all within the same Age (I’m arbitrarily choosing High Middle Ages) to keep them comparable. 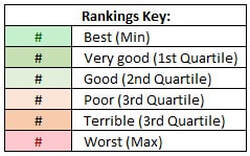 UPDATE:  I've just revamped the breakdowns and added a bit of a 'cheat sheet' for each, which should make it much easier to see at a glance which Event Buildings are good.  It gives the amount of resources per square, and then the rankings as they compare with every other Event Building.
The colour coding is as per the key: