What you can do to help the guild

So, how it all works…
Being in a guild gives you access to communal discussions, including swap threads, and the ability to motivate/polish (aid) your guildmates.  We can also participate as a group in Guild Expeditions, Guild Battlegrounds, and Guild vs Guild battles (we don’t venture into that last one, in this guild).
By working together, we earn guild ‘Power’, which determines the level of guild we are.  If you want to see how we’re doing on Power, just click the Guild button and go to the Level tab. 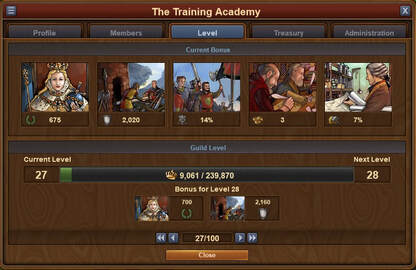 Our guild level comes with rewards, the main ones of which are getting daily Forge Points from our Town Hall (we currently get two, but we’re not far off that going up to three), reductions in cost of both coins and supplies for buildings, and a reduction in the time it takes to both heal and recruit troops.
So being in a high-level guild is beneficial, and actively working towards levelling the guild helps everyone – that’s why we love to see the fantastic level of participation we’re getting in both Guild Expeditions and Guild Battlegrounds.  😊

However, there is a cost to having people in the guild.  This comes in the form of an expense paid by the guild treasury to open levels in the Guild Expedition, and in building structures to help us fight in Guild Battlegrounds.  The cost of both of those things are directly linked to how many people we have in the guild, and what Age they’re at.
Annoyingly, opening the second level of GE requires goods from a level *below* everyone’s Age, so this can be tricky sometimes to arrange, as most people’s passive contributions will only be providing goods of their current age.
For lower level players it’s not an issue because several of us have a stockpile of lower Age goods that we’re happy to pop into the guild treasury as and when needed.  So, for new players still building up their cities, there’s no problem at all in covering the costs while they find their feet.

The good news is, once a player is established and has a handle on the game, there are a couple of things they can do to both help themselves and to help their guild.  First up, let me just say that we’re not looking for donations.  Your goods are valuable and are better spent either building up your city or playing in GE/GBG.  But what is ideal is a passive income into the guild treasury from each long-standing member.
Luckily, there are a couple of buildings that do this.  😊 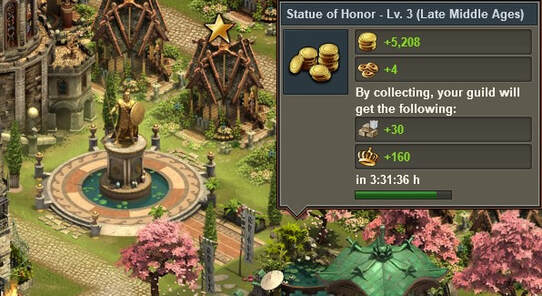 The Statue of Honor:
This one’s a no-brainer, really.  By doing GBG each season, we get a reward of ‘Fragments of Honor Selection Kit’.  Check in your inventory now for them, we should all have some because you get them no matter how much you’ve participated in the Guild Battlegrounds.

It takes 200 Fragments to assemble the initial building, and a further 200 for every upgrade, up to a max of level 5.  You can have as many Statues as you want.
This building gives you coins and Forge Points – a great many Forge Points for its size, once it’s max level.  I plan on eventually getting rid of all my Shrines of Knowledge and swapping them with these, because they’re twice as good.  On top of that, they generate goods each day that go direct into the guild treasury.  Even at level 1 it will generate 2 of each type of good from your Age (going up to 10 of each type at level 5), so if you have one of these you’re more than paying your way as far as us being able to unlock Guild Expedition levels.  😊 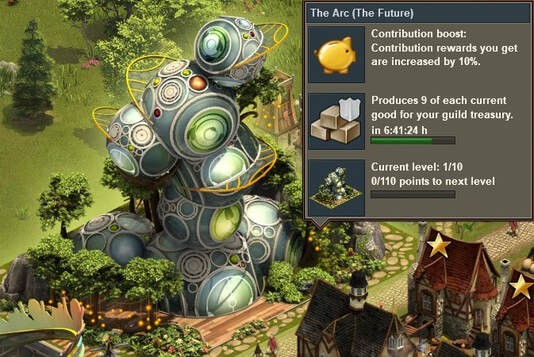 Arc:
The general consensus is that this is ‘The’ Great Building to get as soon as possible.  It’s a Future Age Great Building though, so under normal circumstances it’s quite difficult to get.  However, we’re working on a solution with this and should hopefully be able to provide the goods to build this, all you need to do is gather a full set of blueprints.
The Arc gives a unique bonus in that it increases the rewards you get from contributing to other players’ Great Buildings.  I can’t overstate just how useful this actually is.  For example, what should be a 100 FP return turns into 110 FPs even with only a level 1 Arc, and this 10% increase applies to medals and blueprints as well.  A level 10 Arc gives a 31% increase on everything.

Imaging contributing 100 Forge Points to a Great Building and getting 200 back in return, then doing that again, and again…  The Arc makes it far easier to get Forge Points, medals, and blueprints.
And, on top of that, like the Statue of Honor it also donates a significant number of goods to the guild treasury, so there’s some serious incentive to get this building and level it up. 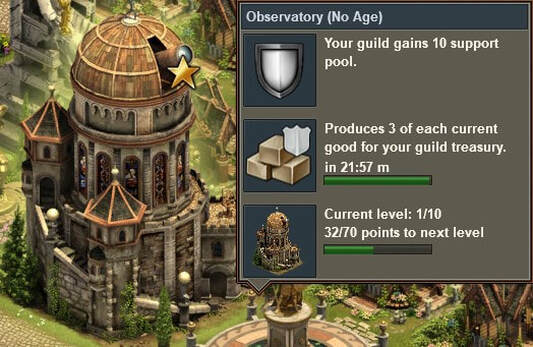 Observatory:
Another Great Building that generates guild treasury goods is the Obs.  Unfortunately, that’s all it does, so there’s no personal benefit for you in having this building.  As a result, we’re not asking people to build these – if you have the space for it and don’t mind putting one up, that’s fantastic, but we won’t be asking you to do so.

So, if you want to help out, here’s the best way to go about it:
1.            Check your inventory for the Fragments of the Statue of Honor Selection Kit.  When you have 200, either build the Statue or make an upgrade kit to use on your existing statue.  And keep checking every month whether you can upgrade or not.  We’re getting around 60 Fragments every season (2 weeks), so it really doesn’t take long for them to build up.

2.            Start actively hunting Arc blueprints from your neighbours and friends, and see if you can contribute enough to earn a reward position.  When you have a full set of blueprints, talk to one of us and we’ll see what we can do in sorting out the goods for you.  It’s early days of our Master Plan, but before long we should have a steady supply of high level goods coming in for everyone.  😊