The Chateau Controversy - To build or not to build...? 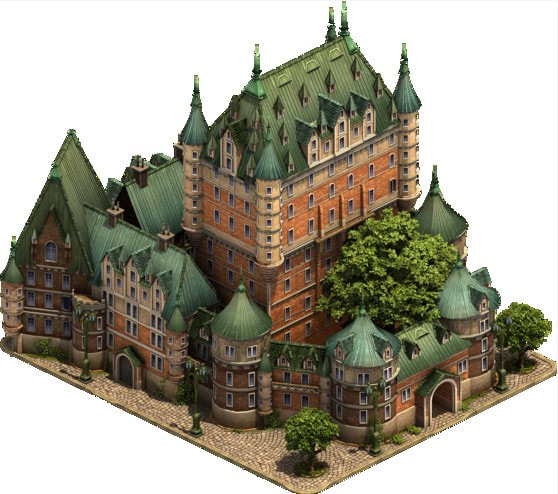 The Chateau Frontenac is very much the cilantro of GBs, you either love it or you hate it.  To avoid confusing messages of some people saying you must build it and others saying don’t bother, I’ll lay out the raw numbers so you can decide for yourself whether you’re willing to put the time in to making it worthwhile.

Some GBs provide passive rewards so you can build them and benefit no matter what.  Others, like the Blue Galaxy or Himeji Castle, require you to do something specific, or in a specific order, to get the most benefit.  And yet others, such as the Truce Tower, require a lot of work to make the most of.  The Chateau falls into this last category, mostly.

On the surface it appears to give a passive benefit – it multiplies the rewards from completing certain quests.  However, the question becomes how frequently are we completing quests and whether the level of multiplication becomes worthwhile on a daily basis.

So, how to make it profitable?
First is to understand exactly what it does, and what it doesn’t do.
It multiplies some of the rewards from some of the quests that you complete.
From the rewards, these are specifically the Coins, Supplies, Goods, Medals, and Diamonds – it does not multiply FP Packs, troops, or blueprints.
From the quests, it’s only the main story quests, the bonus quests, daily quests, and recurring quests.  Event quests and quests within settlements are not included.

So, of these, the recurring quests become the most relevant, because those are the ones you can cycle through on a daily basis and do over and over.  If you time them right with your collection, you can complete a number of the recurring quests without having to do anything more than be a bit careful with what you pick up, and aborting any quests.  For example, you can collect enough Supplies to complete ‘The Spink’, and then abort ‘Produce Bear Hides’ to get to ‘R’lyeh’, which requires you to spend FPs, which is then followed by ‘Fnord’, meaning you can then collect Coins from your daily collection to complete that.  If you’re careful to only pick up enough to complete the quests, and make sure you’re always working on a quest that is achievable, then you can complete probably between 5-8 of these quests per day from one collection, although it will mean that it will add some time to your collection each day.
Beyond that is the quest called ‘Unbirthday Party’, which simply requires you to pay Coins and Supplies to complete, so you can fulfil this quest as many times as you like, at least until your Coins and Supplies run out.

But what do we get for completing those quests?
There are no official figures showing the percent chances of each reward, but someone has helpfully recorded a decent sample size and broken down the results, so I’ll be using his figures (credit to Doublejk2000).
From 531 completions, he received the following:

That works out to the following percent breakdowns, which sounds reasonable to me:


It should also be noted that diamonds are a potential reward as well, however, it is only possible to receive diamonds once from each type of recurring quest.  You’ll get another shot at them when you level and gain access to the new set of recurring quests, but for practical purposes, these recurring quests are not a feasible method of farming diamonds.

Keep in mind as well that the CF multiplier doesn’t work with blueprints or FP Packs from that list, so there’s a 13% chance of receiving something that the boost is irrelevant for.

So, let’s translate that into some actual values…
If you have a level 10 CF (150% boost) and do 100 quests of the repeatable quests over the course of two weeks (just doing an average number of the quests based on what you can do during the course of your collections), you’re most likely going to end up with something like this, working from EMA amounts:

For a level 10 GB that has cost around 4,000 FPs to level to that point, that’s not striking me as all that good.  It’s barely better than a comparable level Lighthouse of Alexandria in terms of goods, and less useful if you take the LoA’s Supplies boost into account.

That is, of course, if you’re just doing the handful of quests that you can naturally do with your collection, approximately 7 quests a day.  If you actually want to sit down and work at it a bit, you can get a lot more out of it, but it also costs a lot more because you’re having to use the Unbirthday Party quest (as it's the only one you can easily repeat without a collection due), which costs 5,000 Coins and Supplies a pop.

So instead, say you do those 100 quests in a day instead of across two weeks.
This will result in 300 goods and 161 medals, which is a much healthier amount.  But instead of making Coins and Supplies, you’ve actually spent a net loss of 342,500 of both.

This, obviously, might be difficult to maintain over the long term.
In addition to that, it’s also quite a bit of a time investment.  There are 7 quests to scroll through to cycle back to the Unbirthday Party quest each time, which takes approximately 10 seconds each time.  So to do a full hundred, you’re looking at the better part of 17 minutes of constant work.

With the cost of Coins and Supplies, you’re essentially paying nearly 1,200 Coins and Supplies per Good.  To put that in perspective, you can pay 800 Coins and Supplies and get 10 Goods 8 hours later from a normal goods building.
So you can generate goods quickly in this manner, but you’re paying 14 times the amount you would under normal circumstances.
At level 40, at a total cost of 41,457 FPs, you’re getting 300% more quest rewards, so the figures are:

At this point, it’s 937 Goods for a net loss of 122,000 Coins and Supplies.  That makes it 130 Coins and Supplies per Good, which is 1.6 times more expensive than usual.
So as you can see, even at the soft cap of level 80, after pouring more than 160K forge points into levelling it, you’re still paying around 60% more for Goods than you would from a Goods building.  The benefit, of course, is that you can make them more or less on demand and can keep going for as long as your patience and Coin/Supply stockpiles last, but you would need to be careful not to drain yourself too dry of resources, as that would have a detrimental effect on your ability to complete events, unlock research, progress Settlements, etc.

Getting nearly a thousand Goods for around 20 minutes work and a net loss averaging just over 100K Coins and Supplies isn’t a bad deal, so I can see why people like the Chateau so much.

But the reality is that you have to invest a LOT of FPs into getting it to a point where it’s actually semi-economical, and then are obliged to similarly spend a lot of time each day to do a, frankly, mind-numbingly boring task for around 20 minutes, just to make sure you’re actually getting use out of the GB and not letting it go to waste.
I can see how people have been able to make large amounts of Goods from it, but I personally feel there’s better – and less boring – ways of acquiring Goods.

As for the other rewards, Medals and Diamonds, I feel they’re barely worth mentioning.  The amount of Medals is negligible (my EMA Crow’s Nest gives me more than doing 100 of these quests would, every few days), and the Diamond reward is either only once per repeatable quest type, or during the quest chain of the Age’s story quests (at which point you wouldn’t have access to the repeatables, meaning you’re not able to use the CF to its full potential).  Even with a nice little hit of Diamonds once per Age, I have no doubt I can earn more in the weekly GE for far less investment of time, FPs, and Coins/Supplies.