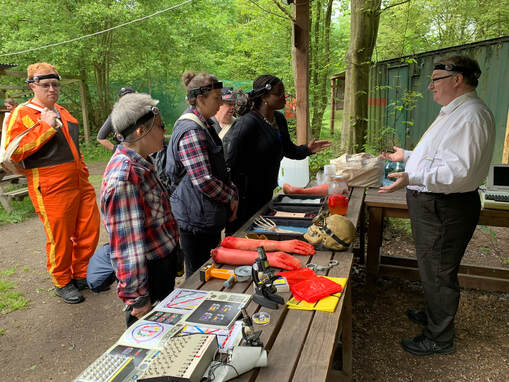 Meeting with another surviving ship from the attack on the Colonies, the Battlestar Cerberus, the crew of the Manticore was commended for their actions and Betty was officially promoted to the rank of Commander.  Admiral Able then tasked the Manticore with retrieving supplies from an old, presumably abandoned outpost on the planet Styx.
However, the crew are met by a strange assistant as soon as they land on Styx, who takes them to the resident head scientist, professor Hectorvector.  It was uncovered that Hectorvector, along with two not-quite-right clone assistants, were performing unsanctioned experiments in cloning and consciousness transfer.  Professor Hectorvector seemed to be expecting a delivery of "the thing", although offered no further clarification.
Following the professor's untimely death, and the sabotage of one of the Manticore's raptors, the crew were set upon by a small raiding party of Cylons.  They were accompanied, and seemingly led by a distinctive man in a hat who was shouting for the crew to turn over 'Daniel'.
The survivors narrowly defeated the Cylons, repaired their crippled raptor, and returned to the Manticore with some supplies but many more questions.
Game 3 - 21st July, 2019
A hotly contested election results in Senator Clayton Pearce being elected as the new President of the Colonies - or what little remains of them.  Celebration is short-lived, however, when a Cylon attack surprises everyone and a Heavy Raider breaches the Manticore's hull.  While the surviving Colonials were able to defeat the Cylons, the Icarus was destroyed during the attack and the Argo's FTL was damaged.
Fearing another attack, Admiral Able took the bulk of the fleet to the next rendezvous point, leaving the Manticore to salvage anything possible from the wreckage of the Icarus, and to assist the Argo with getting their FTL drive operational.
Once aboard the Argo, crew of the Manticore find extremely low morale and a heavily mistreated crew.  They quickly realise the Commander of the Argo is a tyrant, one who may be responsible for the death of anyone who challenged his command.
While repairing the FTL drive, a mutiny is incited and the Commander taken prisoner.  After tense negotiations, the beleagured crew of the Argo agree to remain with the fleet, if a number of concessions and assurances can be made by the new President. 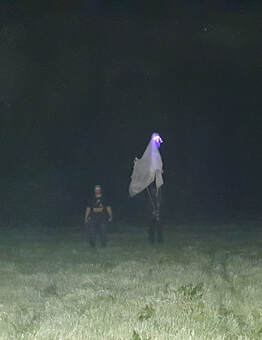 The Friday night game, 'Dark World', was run by Shaun.  Players were mostly university students (or, in some inexplicable cases, primary school pupils) stranded on a crippled spaceship and having to defy a quarantine to search for supplies on a blockaded planet.  Mysteries abounded, sometimes drowned out by annoying 'children', and it soon became clear that not all was as it seemed on the planet of Sedona.
Ghosts who turned out to be drones, and disappearing zombies who were nothing more than men disappearing down tunnels.  And the final reveal... They would have gotten away with it if not for us pesky kids! 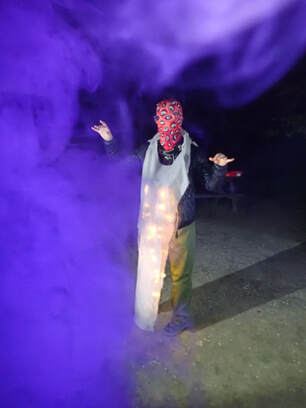 Saturday's game, 'Rescue', run by Dave and Pete, began with an S.O.S from a secret British research facility on a remote island. Abiding by the protocol set up by the professor, an ecclectic team was assembled to investigate, which included military, scientists, and a mystic.
Evidence of almost unbelievable experimentation was uncovered, as well as the growing concern that something had gone terribly wrong.  The rescue team were to encounter the products of these science experiements all too soon, some being friendly, others decidedly not so (and some, we weren't quite sure until they were eating our faces...)
Following the trail of the professor, and under an ominous threat of a cascading chain reaction that put the entire world in danger, the team used the professor's technology to travel into an alternative dimension - a place where everything was dark, the stark opposite of the real world, one might almost say... Upside-down.
Many frightening and disturbing creatures were encountered, some of them down claustrophobic corridors filled with purple smoke.  Members of the party, including the Captain himself, were snatched under the players' very noses.
Once regrouped and mostly recovered from the deadly maze, our mystic was able to lead us unerringly to where the professor and our missing teammates were being held.  After an epic battle they were freed and the team found their way back to the real world - only to find that decades had passed in their absence... 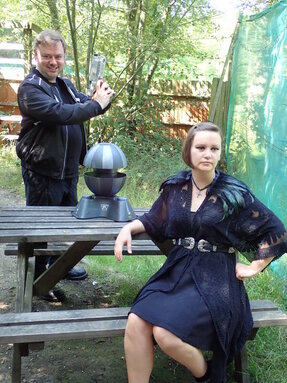 The first game on Sunday was written by Jossman and run by Tony and Jason in his absence.  Players got to dust off their 1970s cheese and live in the world of Blake's 7, rescuing detained rebels, and including an ending that was wholly appropriate and fitting for the show.  Servalan, Avon, Vila, Travis, and Jenna all made an appearance.

Following Blake's 7 was our annual Battle Royale, hosted by the ever-fantastic commentators, Russ and Dave.  Contestants raced, snuck, or hid in a series of shifting zones across the entire site, pitted against each other until only one remained. 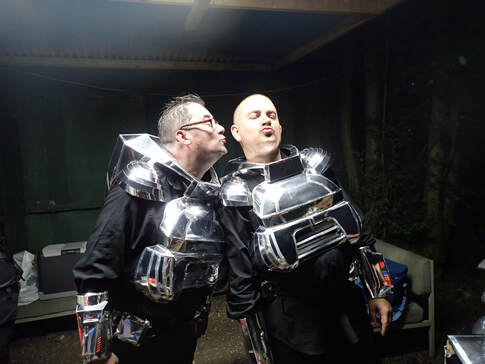 Lastly, Sunday night was rounded off with a Battlestar Galactica game run by Emmett and Kelly, which was billed as a standalone, but was eventually revealed to be a prequel to the current series 'Manticore'.

Colonial Marines were en route to escorting a courier with vital information to Oranu when their shuttle was crippled and crashed into a remote area, after which it was discovered their courier was missing.  Friendly villagers helped them get back on their feet (even offering them the *special* sugar...), and led them on the scenic route to where they may find their missing messenger and the data she carried.
On the way they were ambushed by a scouting party of Cylons, two of which who had captured the courier and were interrogating her for information.
Upon rescuing her, it became vital that the data was uploaded as soon as possible, so the Colonials headed back to the comms array at the village with haste, harried by Cylons the entire way.
Once the upload was complete, the squad leader and courier thanked the team for their assistance and revealed that the data had instead been sent to Cavil, not Colonial Command, and that they had played a vital part in the upcoming attack on the Colonies.  Helen and Shaun were exposed as humanoid Cylons, and opened fire on the Colonial Marines, doing a large amount of damage before being subdued.
Memorable quotes and moments from Invasion: Rescue 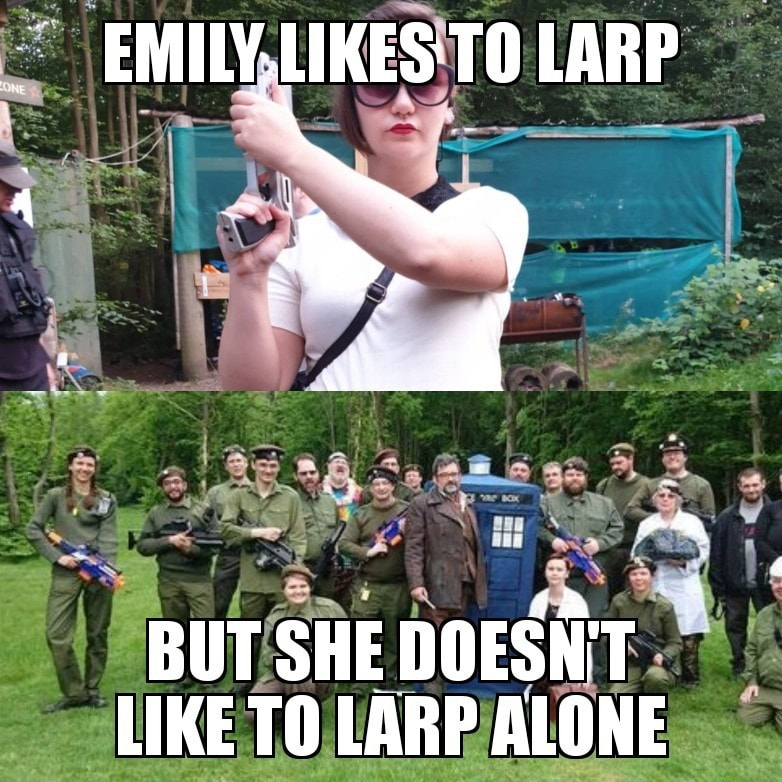 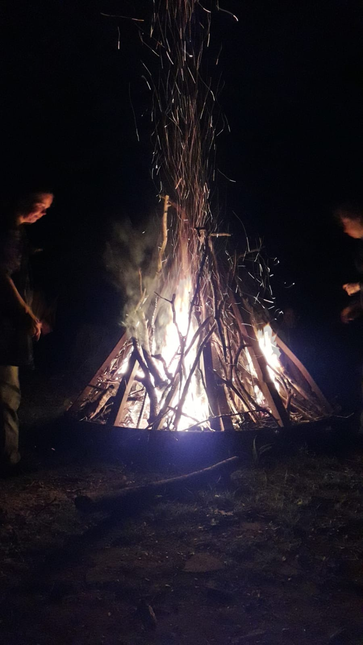 “The answer to that is that we will find out.”

“I’m clearly not gagged because I’m smoking a pipe.”

“She didn’t see THAT coming, did she?”    (Following the eye-beast tripping on a stump)

“Pull my mask off.  No, literally, pull it off…  And I would have gotten away with it if it hadn’t been for you pesky kids!”

“Don’t come at me when you’re all silhouetted by flames!”

“Pipe down missy, the grown ups are talking.”  (Everyone takes a step back to minimum safe distance)

<Following the NPC team being attacked and getting their eyes eaten>
Ana: “Nom nom nom”

“Who this beautiful lady belong to, and how much do you want for her?  I can give many pigs.”

Avon to Vila: “Of course.  Of all of us that could have lived, it had to be you.”

“I say, excuse me!  Hurry up and rescue me, please, I AM a scientific genius!  No, rescue me first, I’m much more important than the Russian spy.”

Sian:  “Can you not touch equipment that you’re not qualified to operate.”
Pete (villager): “What do you mean, my own phone in my own house?”
Wayne (villager): “I WANT TO SPEAK TO YOUR MANAGER.”
Sian:  “Her call sign is Echo Mike India Lima Yankee.”

“In Mother Russia, we queue for 4 hours for potato and it is glorious.”