If you’ve been playing FoE for any length of time you’ve probably heard about a 1.9 thread, most likely in the context of a guild advertising that they have one, or a player asking to be part of one.
1.9 threads are one of the more complex aspects of this game and they can be a little confusing to wrap your head around, so let me try and explain how they work.

As a very broad overview, they’re a thread where someone posts a GB in the expectation that others will contribute to it at a rate of 1.9 (or 190%) of the base FP reward to help it level.  So, for instance, if a GB is posted where the first place reward was 100 FPs, someone would be expected to contribute 190 FPs for that position.

This, on the surface, sounds pretty illogical, but there’s a bit more to it that make them a fairly common feature of the game.

Crucially, they’re reliant upon high level Arcs, specifically an Arc that has been levelled to at least level 80.  The benefit of an Arc is that it increases the amount of rewards you get from contributing to other players’ GBs.  As you can see in the below screenshot, I’m second place on Harp’s Arc, which would normally give me 410 FPs.  But, because I have a mid-level Arc, I get an additional 291 FPs on top of that, meaning I get a total of 701 FPs return from the 685 investment. 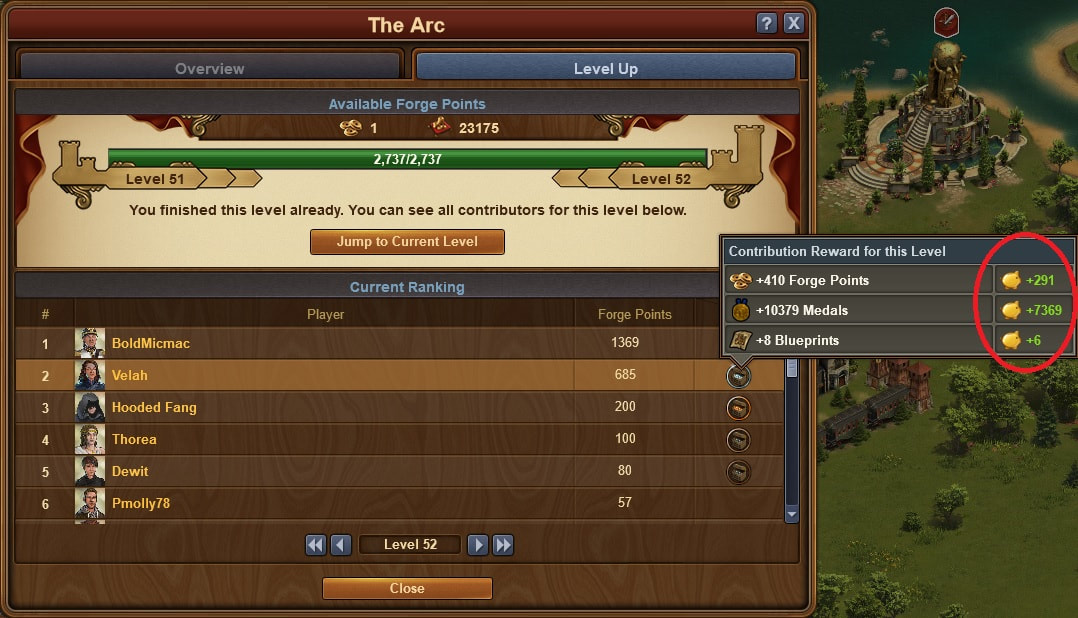 Once you get your Arc up to level 80, the return becomes +90%, meaning that for every 100 FP base reward, I’d get 190 FPs in total.
That means that investing 190% of the base reward into someone else’s GB becomes cost neutral – you’re getting back exactly what you put in, so it doesn’t cost you anything but you get medals and blueprints on top.

There’s another aspect of 1.9 threads whereby the owner of the posted GB needs to ensure that they’re ‘secure’ and safe for people to take the positions at the stated amount without any fear of external sniping.  This requires them to add some FPs of their own before posting it on the 1.9 thread.

This adds up to a total of 761, which leaves the GB 239 short.  Because there’s excess FPs that haven’t been filled, this leaves it open for snipers to potentially come in and jump over the contributions.
With the above example, for instance, an external sniper could come in and add 229 FPs, meaning that they would jump to a secure second place and push everyone else down, greatly lessening the rewards most of the people get and costing them a lot of FPs.

So, to prevent this, the owner of the GB would be expected to add the minimum amount needed to secure the GB from external snipers and make it safe for the people adding the 1.9 rate.  In this instance, that would mean they’d pay in 229 FPs themselves before ever posting it, as this amount would mean it was only 10 FPs short at the end, which isn’t enough to displace 5th position.

As you can see, there’s a bit of maths involved, but that’s the long and the short of how 1.9 threads work.  In a nutshell, the owner adds enough FPs to make it secure, and then posts on the 1.9 thread where others will then add 190% of the base FP amount to get it levelled quickly.

From the above, it should be clear that there’s a fairly important ingredient required, and that’s several people with level 80 Arcs.  As we’re a training guild focused on helping new players, these are in short supply.  That means that asking anyone to pay 190% of the base FP rewards will leave them out of pocket, and that’s very much not what we want to see happen within the guild.  We don’t want people expecting others to pay just to benefit themselves, which is exactly what this would be.

But even with that aside, I have significant reservations about the usefulness of a 1.9 thread.  After discussing it at length and finding a shared sentiment, I believe it’s unlikely we’ll ever introduce a 1.9 thread in TTA, even once we have members with level 80 Arcs.
Here’s why…

A 1.9 thread, in large part, is only of use to the person posting their GB.  It’s essentially quite a selfish means of levelling.  In the above example, the owner has only to pay 229 FPs to level their 1,000 FP Great Building.  Whereas if this was on the swap threads, they would pay out the full 1,000 FPs into other people’s GBs.  That is a very good thing for the owner, obviously.  And it’s why 9 times out of 10, the people who ask me to set up a 1.9 thread are wanting one from the point of view of posting their GBs, not from the point of view of contributing to other GBs that are posted there.
I imagine you can immediately see the problem with this, of people endlessly posting their GBs and expecting others to pay out at a loss to level them, while no one actually contributes to anyone else’s.

There is some benefit to someone with a level 80 Arc contributing.  They don’t get any FPs back, although still do get medals and blueprints.  But this then shifts the rewards exclusively to high level players, who get *more* medals, and *more* blueprints, when quite possibly they don’t even need any more at that stage of the game.  Newer players need these things far more than established players do.  So it’s essentially wasting a huge source of blueprints and having them go to players who probably already have plenty, not to the players who are still struggling to put together a set.

Some guilds try to address this by only requiring the first three reward positions pay 1.9, saving 4th and 5th position for lower players – essentially treating it like a Close to Levelling thread where they just pay the base amount.  That slightly helps the matter, but it feels very much like new players having to scramble for scraps off the high table, and the bulk of the blueprints are still wasted on higher players.

This goes against the ethos of TTA, we don’t want to become just like every other normal guild who prioritises all the best rewards for the higher level players and leaves the new players to struggle through on their own.

The 1.9 thread is only workable with players with high level Arcs who then take the lion’s share of the rewards, and it only really benefits the owner of the GB.  So rather than just helping one person at a time level their GB, and having most of the rewards from it go down the drain, we would much prefer to see people working together in groups where they can maximise all the resources that come from the reward positions.

We see this already with people running Trains, which work well up to around level 10, and we’re developing a new method for higher level GBs that work in a much fairer way for everyone.
Keep your eyes peeled in the future for ROCKETS!  😁